The power of droplets

Researcher Qing Cai works in imec’s Life Science Technology group. Together with the microfluidics engineers, she creates building blocks for the lab-on-chip platform which imec is developing together with other companies and universities. Qing’s focus is on lab-on-chip components for the extraction and detection of DNA and RNA molecules from cells. Recently, imec added something extra to its LOC platform: working with droplets. From diagnostics till beer ... Qing explains the power of droplets.

A lab on a chip

A lab-on-chip (LOC) is a small device (typically only a few cm² in size) that can purify and analyze a sample (blood, urine, saliva), just like a clinical lab does today.In the future, lab-on-chip (LOC) devices will assist healthcare workers such as GPs, specialists, and pharmacists to monitor your health. Which is why companies and researchers worldwide are constantly developing new LOCs and LOC components. Imec’s focus is on lab-on-chips which are made partly or in a whole from silicon – the same material from which computer chips are made. The big advantage here is that you can create a single, integrated system, complete with pumps and valves for transporting samples, incubator chambers for carrying out biochemical reactions, ultra-fast microscopes for viewing, microprocessors for data-processing, etc. All that encapsulated in one tiny device just a few cm² in size – and which is also cheap to produce that it can be used as a disposable test unit, comparable with a pregnancy test today.

A lab-on-chip with droplets

A new feature of imec’s LOC platform is its ability to work with droplets. Qing Cai: “We produce ultra-small microfluidic components that can make, merge and split these droplets. Depending on the application, these functions can be added to the pathway that the sample follows in the LOC device.

Imec has expanded its lab-on-chip platform with a droplet-maker (left), merger (center) and splitter (right). These are building blocks that can make your lab-on-chip faster, more powerful and smarter.

Droplets are of interest for genetic diagnosis and for developing ‘digital tests’. Cai: “This can be done by partitioning the DNA of patients, with some droplets containing a few DNA molecules – or none at all. Only those droplets with one or more DNA molecules light up, due to the PCR reactions carried out on them (PCR = polymerase chain reaction, a process to amplify a specific sequence from a small amount of DNA, generating thousands to millions of copies of this particular DNA sequence). That’s why we call these tests ‘digital’: they deliver a binary result. You can then count the light-emitting positive droplets and quantify very accurately the number of DNA molecules in a sample (via the Poisson Distribution statistic). We have also used this method to develop a microfluidic chip that works with droplet technology. We use it to identify particles of RNA from blood (micro-RNA, which act as biomarkers to determine the type of cancer). We first convert this RNA to DNA, which we then quantify using “droplet digital PCR”. Panasonic and imec developed a compact readout unit (comparable to the head of a DVD-player) that is able to count the positive droplets very quickly. 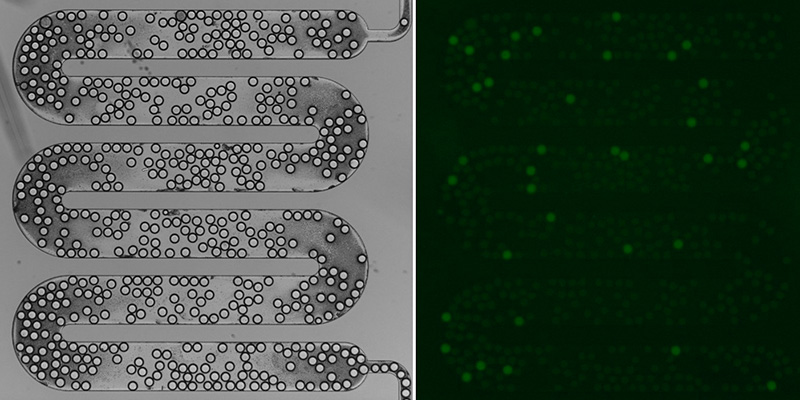 Microfluidic chip reactor of the digital droplet-based PCR chip for establishing a micro-RNA profile quickly for determining the type of cancer. The first photo depicts a chip reactor filled with droplets, at the right the same reactor, but after the PCR reactions. The luminous droplets contain a DNA molecule or molecules.

Droplets are also useful in cellular diagnosis. Imagine that you want to look for circulating tumor cells (the so-called CTCs that cause the formation of metastases in cancer and which are typically spread through the whole body via the blood) in a sample of blood. You allow this blood sample to flow through a specialized lab-on-chip with a lens-free microscope, identification software and a sorting mechanism. And at the end you know whether or not there are CTCs present in the blood sample. In itself this is already a very important result, particularly as it can be achieved quickly and right by the patient’s bed. Qing Cai: “But it can also be interesting to study the CTCs separately afterwards. In fact we know that cancer cells from the same tumor can differ significantly. This heterogeneity makes it difficult to fight cancer, because each cell reacts differently to the treatment. This means that a more accurate diagnosis is required. To achieve this, we add our droplet technology to the lab-on-chip.  The blood sample with tumor cells is partitioned into droplets and as a consequence every droplet contains one CTC. This makes it possible to identify every cell accurately and separately, which is essential for selecting the right medication or radiation treatment.”

Another example of the importance of accurate isolation is to be found in a completely different field. Qing Cai: “A fellow researcher (Yannick Vervoort) works for the Verstrepen Lab at KUL/VIB. He looks for yeasts that produce large amounts of alcohol and which can survive in an alcohol-rich environment. These yeasts are important for the production of beer with a high alcohol content, so that brewers can dilute it further to 5% alcohol – the strength of a lager. This generates enormous savings on the production costs.

Thousands of new yeast mutants are produced at the Verstrepen Lab for this application by crossing strains of yeast. But it is difficult in an ordinary laboratory to separate the superior yeast mutants from the thousands of other. Which is why the Verstrepen Lab, AbInBev (through the AB-InBev Baillet-Latour fund) and imec are working together to develop a lab-on-chip droplet application for selecting and isolating yeasts at high speed and on a large scale. The yeasts are each placed separately in droplets and incubated in a micro-reactor in the LOC. After fermentation, the alcohol content of each droplet is measured by fusing each yeast droplet with an enzyme droplet. The enzyme converts the alcohol into a fluorescence signal. Finally, the system identifies and isolates the most fluorescent droplet – i.e. the one with the most alcohol-producing yeast.” And this yeast can then be cultivated to produce a delicious glass of Belgian beer ;-)

Lots and lots – and very quickly

The advantage of working with droplets is not only the precise isolation of substances, but also the rapid reaction within the droplet. Since the volume is very small, reagents are able to do their work quickly and efficiently. Qing Cai: “High-throughput tests become even easier if you use droplet-based lab-on-chips. Imagine you want to test whether a bacteria is resistant to a specific antibiotic. You can do so by generating droplets with bacteria, which you could merge with droplets with varying concentrations of certain antibiotics. This can even be done in parallel by combining droplets with different antibiotics and specific concentrations.”

So, as you can see, the possibilities of lab-on-chips are endless. We eagerly await the time when we can use them extensively!

Recording the brain at work with thousands of sensors