This optical antenna is a magic wand for light

Researchers at imec and KU Leuven made an optical antenna that is shaped like a boomerang and made out of silicon. It can be used for all kinds of applications that use light waves on chip, from sensors to optical communication, solar cells, holographic lenses and even quantum computers.

Quantifying a tumor’s response to treatment earlier and more accurately

Joint European effort to unlock the potential of graphene

Everything gets smart! And imec can give a helping hand

This optical antenna is a magic wand for light

You could compare it to a radio antenna, except for the fact that an optical antenna works with light instead of radio waves. Researchers at imec and KU Leuven made an optical antenna that is shaped like a boomerang and made out of silicon. The antenna scatters different colors in different directions. This unique effect can come in handy for all kinds of applications that use light waves on chip, from sensors to optical communication, solar cells, holographic lenses and even quantum computers.

Red to the left & green to the right

The new optical antenna scatters light in a direction that depends on the wavelength of the light. E.g.: when you illuminate the antenna with red light it bends to the left, while green light bends to the right. This color-specific scattering of light is something unique in the photonics world. Niels Verellen, FWO postdoc and one of the scientists working on this development, explains: “The fabrication of optical antennas is not straightforward since it concerns nanoscale dimensions. The typical size measures a few 100 nanometers, which is 100 times thinner than a human hair. Optical antennas are usually made of noble metals such as gold or silver. But recently, silicon has entered the spotlights as an interesting material for low-loss antennas. And if there is anything imec excels at, it is nano dimensions and silicon.”

Add to this the expertise in metallic, or plasmonic, antennas built up at the biophotonics research group and the silicon boomerang-shaped antenna quickly came into existence. Niels Verellen: “In 2013, within the framework of the PhD of Dries Vercruysse, our group made the smallest golden nano antenna that scatters light into one direction, a so-called directional antenna. This one also had the shape of a boomerang.

Other research groups focus on symmetrical shapes such as spheres or cylinders. We strongly believe in the unique properties of asymmetrical shapes for optical antennas. This is why we made a silicon antenna with an asymmetrical boomerang shape. Whereas the metallic antenna can only scatter one color in a specific direction, the silicon counterpart can magically scatter different colors in different directions. You could compare it to a very small prism. There is however an important difference with a prism in that the antenna scattering is not based on the conventional refraction of light, but on the interference between resonance modes in the antenna. Other advantages of the silicon boomerang antenna (as compared to the metallic one) are its more efficient light scattering and lower absorption losses.” 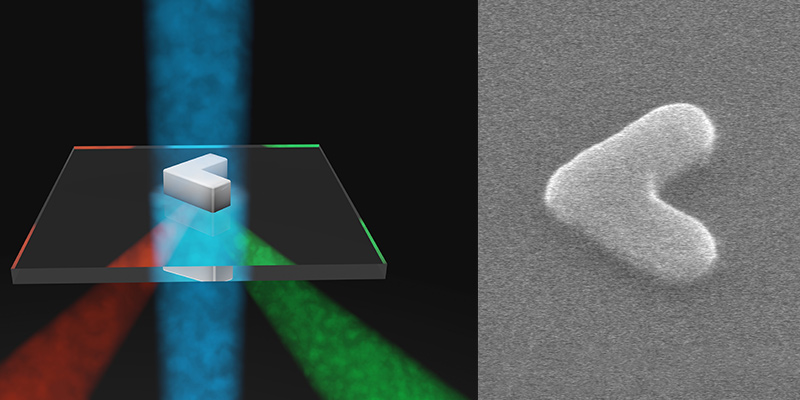 Glass plate with half a million optical antennas.

The color dependent scattering of light is a unique property that is interesting for several applications. Niels Verellen: “Nowadays, color prisms or diffraction gratings are often used in optical instruments. These instruments are made up of many separate optical components – which have to be aligned – and which make the instruments relatively large. Imagine you could integrate all these functionalities on a chip. You would end up with an extremely compact optical system that is easy to use.”

An important advantage of the silicon antenna is that it works for visible and near-infrared light. These are also the wavelengths that are mostly used in life science applications for the detection of molecules. Niels Verellen: “Just think of fluorescent labels, Raman spectroscopy etc. The antenna could be used in a multiplexing experiment in which two fluorescent labels need to be detected (e.g. a green and red label). By placing two photodetectors underneath the antenna, one could easily read out the signal strength of both the red and the green light separately.”

The optical antenna is made of silicon, the same material as electronic chips. Therefore, it is relatively easy and cheap to integrate this building block on a chip, e.g. as part of an on-chip photonic circuit. These kinds of circuits are used for on-chip communication or the detection of biomolecules in optical biosensors. Niels Verellen: “Think of them as extremely high-speed highway networks where information is carried by light waves that move through waveguides. To control the traffic, you need some kind of traffic light. Our antenna could do that job by directing red light to the left, and green light to the right. Current photonic components that perform similar tasks have footprints that are easily ten times the size of the boomerang antenna.”

And there will be more applications for the optical antenna. In fact, all applications in which light is being used and focus is on a compact silicon-based system. Examples are 2D lenses, holograms, solar cells etc. Imec cooperates with many companies in different fields such as life sciences. Depending on the specific project, the antenna will be considered as one of the building blocks for an integrated solution.

What brings the future (for this antenna)?

This new optical antenna concept will be further developed in the framework of the FWO postdoc of Jiaqi Li. Niels Verellen: “We will try out other materials to be able to address other wavelength ranges. Depending on the discussions we have with our partners, the antenna shape can be optimized for specific applications. Also, we want to make this antenna an ‘active’ component that changes its properties according to an external pulse. E.g. it could mean that by applying a voltage to the antenna it makes red light now go to the right instead of to the left. The focus of our future work will depend on the specific needs we see in our research projects. One thing is for sure: there are a lot of opportunities ahead with this new antenna concept.”

The development of this new optical antenna fits into a whole research strategy. Liesbet Lagae, program director Life Science Technologies at imec: “The optical antenna is a perfect example of a new trend in the photonics domain: flat optics. Flat optics for visible light is especially important for biophotonics, where photonic components are used to make integrated life science systems. Nanostructures with a certain shape and material placed in a specific configuration, can mimic the functionality of lenses, color splitters etc. But with the advantage that the resulting structure is much more compact and cost effective and often also more efficient. With flat optical components, one can make a stack of functionalities: a lens layer on top of a color splitter layer (= the optical antenna), on top of a detector layer. Combine this stack on a silicon chip, and the result is a complete detection platform for visible light. Moreover, this detection system is easy to integrate with other functionalities of electronic chips and can be mass fabricated in existing fabs.”

A good example of such an integrated system is the cell sorter chip that Liesbet Lagae and her team are developing in the framework of her prestigious ERC grant. Liesbet Lagae: “We are making a compact and easy-to-use system that can sort and analyze individual cells (e.g. cancer cells) in blood. The system consists of several silicon-based building blocks: microfluidic channels, heating elements, mixers, bubble generators etc. Flat optics are also an essential part of this compact system. For example, a stack of lens, color splitter, and detector layer could be used to detect cells with different fluorescent labels in a fast and compact way.”

Flat optics is a relatively new domain in biophotonics. Another – better known – domain is the one of photonic circuits (PICs). Here, very compact photonic components are connected one after another to guide light through the circuit and e.g. detect biological molecules. Liesbet Lagae: “For PICs, imec has set up a SiN photonics platform for visible light applications. Companies can use this innovative technology which can be tailored to their specific needs. Concerning flat optics, we make silicon-based flat lenses (e.g. for use in DNA sequencers and cytometry) and optical antennas / color splitters. The latter is a unique building block, not yet widely available and described in literature.”