The solid-state batteries that are on the market today are thin-film batteries which, on account of their limited capacity, can only be used for micro-storage, for example to provide power for sensors. But as a result of innovations in materials and architecture, the design of solid-state batteries may be expanded to large storage systems, for example for electric cars or the smart grid. Philippe Vereecken, Principal Scientist and Program Manager ‘Electrochemical Storage’ at imec, explains imec’s roadmap that makes this development possible. Developing a nano-composite electrolyte with high ion conductivity is an important link in achieving that aim.

The introduction of the rechargeable Li-ion battery in 1991 brought about a general revolution in the battery landscape. As a result of its high energy density, more energy could be stored in a small volume, which meant that the energy needed to power a device such as a laptop could be made portable. The emergence of this battery also enabled the rapid rise of smart, mobile electronics. Philippe Vereecken: “Without the Li-ion battery, smart devices could never have been designed with such small and elegant form factor. Today, it is also chosen as a solution for systems that require more energy such as electric vehicles or as temporary local energy storage for the smart electricity grid. For these applications, other parameters are important, such as the storage capacity (expressed in Ah) and the lifetime. For electric vehicles, the power (maximum current flow) is also important: the car must be capable of accelerating quickly and we also want to recharge the vehicle in a short time. Current electric cars drive entirely on Li-ion batteries.”

To generate current, both electrons and lithium ions move from the negative to the positive electrodes. During charging, they move in the opposite direction. The amount of electrode material mainly determines the storage capacity. The electrolyte provides the ionic conductance between the electrodes and defines the power of the battery. Philippe Vereecken: “The liquid electrolytes which are used today have a number of limitations. For instance, the use of the liquid electrolyte requires the use of special housing, as well as a membrane between the porous anode and cathode. This puts restrictions on the dimensions and design of this ‘wet’ battery. The liquid electrolytes are typically also flammable and corrosive, which creates safety and health risks.”

Several options are being explored for the battery of the future that overcomes these limitations without compromising on performance – or doing even better. Imec’s choice here is the concept of the (inorganic) solid-state battery. Philippe Vereecken: “With a solid electrolyte, the electrodes can be placed closer together, making the battery more compact and thus delivering greater energy density. Unfortunately, the solid-state electrolytes available at the moment have too low an ion conductivity. As a result, the lithium ions are only able to span a short distance so that these batteries only exist in the form of planar thin-film batteries. These batteries can only be used for micro-storage on account of their limited capacity. There are already a number of these batteries on the market today.”

The 3D thin-film battery for micro-storage

The solid-state design lends itself to completely new battery architectures, such as the compact 3D thin-film battery. Philippe Vereecken: “In this type of battery, the thin-film stack is coated over a micro-structured substrate instead of on a planar substrate. This method enables very thin films to be used for the electrode and the electrolyte, while achieving energy densities comparable with current-day battery technology. However, the actual capacity will still be limited due to the intrinsically small dimensions of these batteries. For this reason it is important that this battery can be recharged quickly or topped up in the background so that the battery is never completely discharged and the microsystem is never without power. This is made possible by using thin films of at most a few hundred nanometers thick. As a result, the ions only need to travel a short distance and the battery can be recharged in a matter of minutes. These small form batteries are intended for microsystems such as implants, sensors and ‘smart cards’.”

Imec has already demonstrated a proof-of-concept where the electrodes (LMO and LTO) were coated on a 3D micropillar array, made using lithography. Philippe Vereecken: “We are also working on an alternative for lithography so that the micropillar structures can be produced more cheaply. To do this, we will use process engineering based on foil, which will also make the battery flexible. In a later phase, we will further upscale the thin-film technology to greater energy and power densities so that it will be suitable for applications such as flexible, portable electronic devices.”

Schematic of the 3D thin-film battery; (right) Coated 3D micropillar structures. The pillars have a diameter and spacing of 2 micrometers.

With today’s solid-state electrolytes (such as LiPON, lithium-phosphate-salt doped with nitrogen) we can currently achieve intrinsic conductivities of only 10-7-10-6 S/cm, which means that the electrolyte layer is limited to a maximum of one micrometer thick. To make batteries suitable for electric cars or home storage, we need conductivities of 10-3-10-2 S/cm.

Philippe Vereecken: “At imec we invest quite some effort in the development of the solid electrolyte. We engineer materials at the nanoscale in order to achieve high ion conductivity. We use, for example, nanoporous silica, a material that we have a great deal of experience with in the chip industry. When combined with a lithium salt into a composite, faster ion conduction can be achieved as the lithium ions move through this material along the surface of the silica. Their conductivity is further enhanced by what we call ‘pore confinement’ – the ‘locking’ of the lithium ions in the pore structure. As a result of this ‘pore confinement’, the properties of the bulk material are altered. Using this method we have been successful in developing a nano-composite electrolyte with a conductivity of a few mS/cm at room temperature. So this is more than enough to produce a high-capacity battery based on powder electrodes.”

With this electrolyte, the researchers have reached the transition point and have started with the development of a solid-state powder-composite battery. In this battery, the electrode structures are much thicker (>70 micrometers) and as a result the battery capacity is much larger. The new electrolyte with an ion conductivity of over mS/cm means that the lithium ions are able to span the distances in and between the electrodes. Philippe Vereecken: “With this cell we are aiming at capacities in the order of Ah. This means they can be used in batteries for portable electronics (such as laptops or cameras), as well as for electric cars of the future, and in home storage systems for the electricity grid. By using solid-state batteries, this will enable us to offer a safer alternative to the ‘wet’ Li-ion battery. This will be a major asset for applications such as the electric car. It will also be possible to make these batteries more compact than the existing ‘wet’ Li-ion batteries and hence they will have greater energy density.”

Schematic view of the solid-state powder-composite battery with nano-composite electrolyte.

To make this battery, the researchers follow as much as possible the same coating technology as that used in the fabrication of ‘wet’ batteries. Philippe Vereecken: “For the electrode coatings, micron sized active electrode particles are used. To increase the electronic conductivity through these porous electrodes, carbon is added. A binder polymer holds the active particles and the carbon in the electrodes together on a metal foil. After drying and compressing the electrode coating, the anode and cathode are brought together, with a porous membrane between them as separator. The assembled battery stack is then soaked with the liquid electrolyte so that it is present both inside the porous electrodes and inside the porous separator between the cathode and the anode layers. Our powder-composite battery is fabricated in a similar way. But now the nano-composite electrolyte is applied as a wet coating and then dried to obtain a solid-state electrolyte. We have built first demonstrators of this battery, using LFP (LiFePO4) as the cathode and LTO or lithium metal as the anode. The electrodes were coated at JSR using their specific aqueous binder material. So far we are achieving 50% of the capacity for a similar cell with a liquid electrolyte.” In a next step, the capacity and rate performance will be improved. 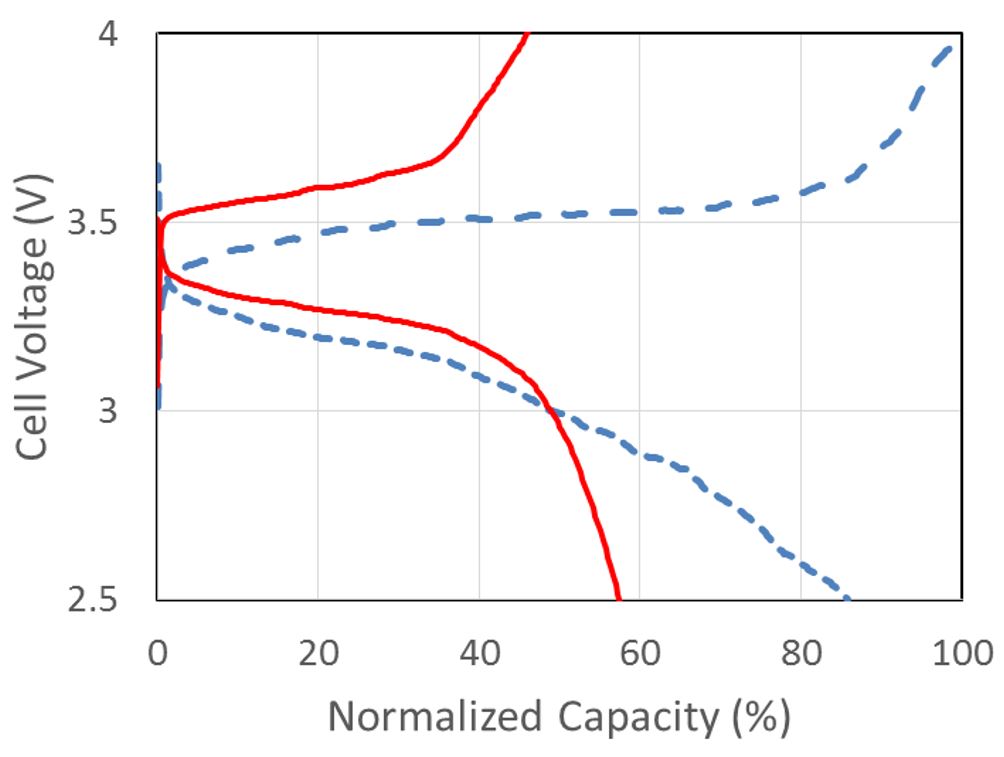 Charge/discharge performance of the powder-composite battery . The capacity is 50% of the capacity for a similar cell with a liquid electrolyte (dotted line). Data have been measured by Xubin Chen (imec and KU Leuven).

The development of the powder-composite battery is part of EnergyVille activities, a center of expertise that unites KU Leuven, VITO, Hasselt University and imec for research into sustainable energy and intelligent energy systems. Philippe Vereecken: “Hasselt University and our affiliated lab IMOMEC there are also involved in this work. We will collaborate with them to continue research into powder coatings and electrode nano-particles. The next stage will be to upscale the technology. This will be done mainly in the new battery lab (with a dry room) that will be built in Genk as part of EnergyVille.”

Is the Fully Autonomous Car Poised for Failure?

“For a small company with a pioneering product, it’s a good choice to collaborate with a technology expert like imec.”

From wearables to careables: closing the loop in connected health

Inhale the future: bringing respiratory monitoring to the 21st century